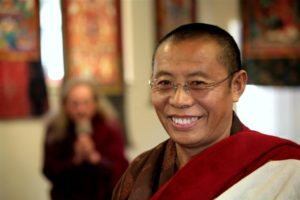 Gochen Tulku Sang-ngag Rinpoche is the founder and spiritual director of Ewam International Centers around the world. Born in 1952 into one of the oldest families in Tibet, which eventually came to be known under the name Namchak, or “sky iron,” in an area called Chamdo in the Kham region of Tibet, Rinpoche was recognized in early childhood by the great rimé lama (representing all traditions of Tibetan Buddhism), Jamyang Khyentse Chökyi Lodrö [1893-1959], as well as by the former Zigar Kongtrul Rinpoche, to be the reincarnation of the GochenTulku.