In Kapala Training Level IV, you will receive Machig’s Ultimate Meaning from Lama Tsultrim, as well as the Crystal and the Rainbow Rays Movement Practice.

The above prices do not include teacher offerings or dana. If you would like to offer dana for this retreat prior to arrival you can do so here. 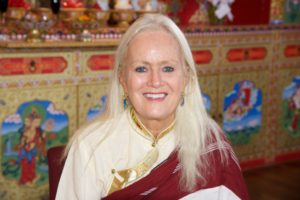 Lama Tsultrim Allione
Lama Tsultrim Allione is founder and resident lama of Tara Mandala.  She is author of Women of Wisdom, Feeding Your Demons, and Wisdom Rising: Journey into the Mandala of the Empowered Feminine. Born in New England to an academic/publishing family, she traveled to India in her late teens and was ordained as…
Learn more about Lama Tsultrim Allione
© 2001-2019 Tara Mandala. All Rights Reserved. Privacy Policy | Terms of Use | Registered 501(c)(3). EIN: 84-1270902
This website uses cookies to improve your experience. Accept Read More
Cookies Policy
Necessary Always Enabled