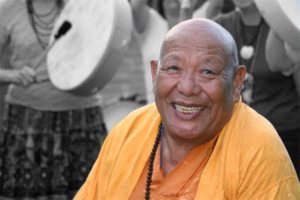 Lama Tsering Wangdu Rinpoche was born in 1939 in the Langkor Valley in West Tingri, Tibet. The region was the Tibetan home of Padampa Sangye, the founder of the Shije and Machik Labdron, the founder of Chod. Lama Wangdu Rinpoche began studying with his root lama, Naptra Rinpoche, at age 8. After years of practice, his guru sent him on a traditional Chod retreat, during which he practiced Chod in 108 charnel grounds. On his return, his teacher acknowledged his accomplishment, gave him further instruction and in 1958, sent him on pilgrimage to Nepal. When the Chinese closed theTibetan border in 1959, a trip that was to last one year was became exile; he has not been able to return to Tibet since.

Rinpoche made his way to the Kathmandu Valley, where he settled in the Tibetan refugee camp in Jawalakehl. He lived there for many years, and as one of the few Nyingma ritual practitioners accessible to both Tibetan refugees and Nepalis, became well known as a Chodpa and healer throughout Nepal. In addition to serving as a spiritual leader for the Tibetan community, Rinpoche spent significant time in retreat, and received teachings and empowerments from the Dalai Lama, Dudjom Rinpoche,  Surkhang Rinpoche, Urgyen Tulku, and Chatral Rinpoche.  Today he is recognized as a lineage holder of Padampa Sangye’s Shijye, numerous Chod lineages, and the Longchen Nyingthig.

Today, Lama Wangdu RInpoche is the Abbot of Pal Gyi Ling monastery and continues to serve as a healer and spiritual guide for countless people in Nepal and the United States. As one of the few remaining Tibetan lamas who trained and practiced in pre-occupied Tibet, he is also committed to preserving and transmitting the authentic and rare teachings he has received and brought to fruition through decades of practice.You can learn more about Lama Wangdu’s life in Tibet and Nepal by reading his autobiography,