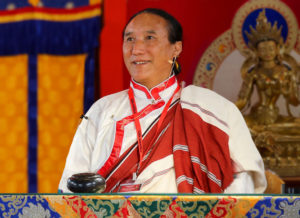 Venerable retreat master (Drubpön) Lama Karma was born in eastern Bhutan and joined the Long-Nying Chöling Monastery at a young age. His root teacher was Lama Naljorpa, the great yogi of Mahamudra and Dzogchen, from whom he received numerous vows, empowerments, instructions and oral transmissions, including the Chöd Rinchen Trengwa and the Chöd practice of Laughter of the Dakinis from the Longchen Nyingtik Tradition. A heart student of Terton Pedgyal Lingpa Rinpoche, he served as the scribe for the entirety of Pedgyal Lingpa’s Kusum Gongdü treasure cycle. Drubpön Lama Karma studied with other great teachers, including H.H. Dodrupchen Rinpoche, H.H. Penor Rinpoche, H.H. Taklung Tsetrul Rinpoche, H.H Dilgo Kyentse Rinpoche, H.H. Dudjom Rinpoche, and the 16th and 17th Karmapas. He has spent over 16 years in strict meditation retreats. Drubpön is renowned as a genuine retreat master throughout Bhutan and has been one of the most important Bhutanese lamas to disseminate the teachings and maintain the tradition of Terton Pedgyal Lingpa.