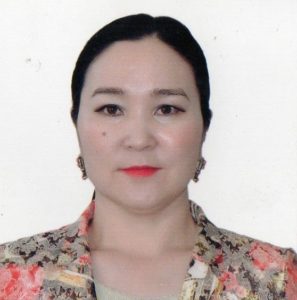 Kunze Chimed, a native of Mongolia, began her study and practice of Buddhism at the age of seventeen under the tutelage of old Mongolian Buddhist masters who survived the Communist regime. She joined the Jamyang Choeling Buddhist Nunnery in Dharamsala, India for three years, and pursued further study of Buddhist texts and philosophy at the Institute of Buddhist Dialectics. While in Dharamsala, she began her study with the Ninth Khalka Jetsun Dampa Rinpoche, recognized by the 14th Dalai Lama as the head of the Mongolian Buddhists. During this time she received numerous Chöd empowerments, oral transmissions and teachings and engaged in Chöd retreats at various holy sites under Jetsun Dampa Rinpoche’s direct guidance. Kunze has translated and published several works, including the Manual of Chöd Practice, the Liberator Mother Tara, and the Four Preliminary Guides of Barom Kagyu Practice. She is also a well-known singer; her CDs include “Chöd,” “The Tara Sound,” and “Vajrayogini Chod Tsog.” For the last 13 years she has been teaching Chöd in Mongolia and Russia.