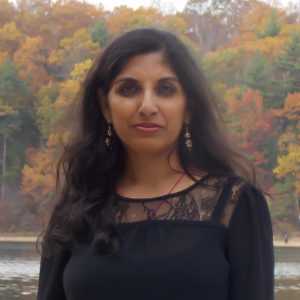 Ranjini George holds a PhD in English (Northern Illinois University, USA), an MA in English (St. Stephen’s College, New Delhi, India) and an MFA in Creative Writing (University of British Columbia, Canada). She was a Georges and Anne Bochardt Fiction Scholar (Sewannee Writers’ Conference) and received the Arnold B. Fox Award for Research Writing (Northern Illinois University). More recently, she won the first place in Canada’s inaugural Coffee Shop Author Contest for her travel memoir, a work-in-progress, Miracle of Flowers.  She was born in Calcutta, India, lived in Kenya, the US, and the Middle East.  She taught English at Northern Illinois University (USA) and at Sultan Qaboos University (Oman). For thirteen years, she was an Assistant, then Associate Professor of English at Zayed University, Dubai, in the United Arab Emirates, where she also began the Teaching with the Mind of Mindfulness series. She was the founder and editor of Studies in Literature and TESOL, The Arabia Review and created the Literature Special Interest Group of TESOL Arabia.  A Mindfulness Meditation Instructor she trained in various wisdom traditions and studied with different teachers such as Sri Sri Ravi Shankar, Thich Nhat Hanh, Hari Nam Singh Khalsa and, of course, Lama Tsultrim Allione.  An Inter-faith and women rights activist she speaks in gatherings such as the Inter-faith Symposium held by the Ahmadiyya Muslim Women’s Association and at the Parliament of World Religions, Toronto, November 2018. She currently teaches classes such as Meditation & Writing and Pilgrimage to the Sacred Feminine in the Creative Writing Program, SCS, University of Toronto.  Her stories and essays have been published in literary magazines such as Agni,  The Ontario Review, Write (the Writer’s Union of Canada magazine) and A Room of One’s Own. Her book, Through My Mother’s Window was published in Dubai in December 2016. In 2019 she won the Excellence in Teaching Award at the School of Continuing Studies, University of Toronto. She can be contacted through her Facebook page, Ranjini George, Writer, https://www.facebook.com/TheKuanYinStoryCafe/. 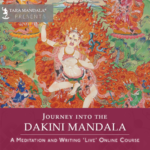 Journey into the Dakini Mandala: A Meditation and Writing - Online Course
May 5, 2021

In this 7-week ‘live’ online course, Karla and Ranjini will: Guide you on a journey into the heart of the Five Wisdom Dakini Mandala. Discuss Lama Tsultrim’s book, touching on some of the key elements of the writer’s craft: setting, scene, point-of-view, character and story. Learn possible ways of structuring…