Lama Rod Owens is an author, activist, and authorized Lama (Buddhist Teacher) in the Kagyu School of Tibetan Buddhism. Lama Rod is the co-founder of Bhumisparsha, a Buddhist tantric practice and study community. Lama Rod is also a teacher with the Daishin Zen Buddhist Temple, the Urban Yoga Foundation, Inward Bound Mindfulness Education (iBme), a visiting teacher with Natural Dharma Fellowship and the Brooklyn Zen Center. Lama Rod has been a faculty member for the Harvard Graduate School of Education’s professional education program in mindfulness for educators and has served as a guest faculty member for the school’s course Mindfulness for Educators.He holds a Master of Divinity degree in Buddhist Studies from Harvard Divinity School where he focused on the intersection of social change, identity, and spiritual practice. He is a co-author of Radical Dharma, Talking Race, Love, and Liberation, which explores race in the context of American Buddhist communities. Lama Rod is a founding teacher for the Awaken meditation app that offers meditations and contemplations focused on social change. He has been published and featured in several publications including Buddhadharma, Lion’s Roar, Tricycle, The Harvard Divinity Bulletin, Spirit Magazine, and contributed the chapter on working with anger for the recent publication Real World Mindfulness for Beginners. He is a regular guest on SiriusXM’s Urban View hosted by Pulitzer Prize winning journalist and publisher Karen Hunter. He has offered talks, retreats, and workshops for many organizations and universities including New York University, Yale University, Harvard University, Harvard Law School, Columbia Law School, Tufts University, University of Vermont, and Boston College. Lama Rod facilitates undoing patriarchy workshops for male identified practitioners in Brooklyn and Boston. Lama Rod’s next book project will explore transformative anger and rage and is due out Fall 2019. Lama Rod can be reached at www.lamarod.com. 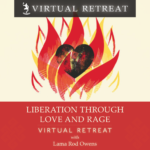 Liberation through Love and Rage - VIRTUAL RETREAT
May 28, 2021

As Audre Lorde has written, there is so much data in our anger. One of the things that we can learn is how to let our anger show us where we have been hurt. We can let this great unveiling happen through the profound practice of radical love. When we…