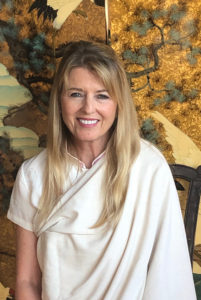 Sangye Khandro became a Buddhist in 1971 when she traveled to Asia, finally arriving in Dharamsala, India, where she began six-months of study at the newly opened Library of Tibetan Works and Archives. Throughout the next seven years, she continued her studies of Buddhist teachings and the Tibetan language. She helped to establish numerous dharma centers in the United States and has served as translator for many prominent masters in all four lineages. Sangye has been the spiritual companion of the Venerable Gyatrul Rinpoche for over thirty years and has continued to serve the centers established by her root teacher, Kyabje Dudjom Rinpoche. She also had the good fortune to become a disciple of Dungsei Thinley Norbu Rinpoche, who helped her sharpen her translation skills for many years. Sangye Khandro is a co-founder of Light of Berotsana Translation Group and continues to work closely with Lama Chönam to translate and publish important tantras, shastras, and Great Perfection upadesha treatises. She has been the personal translator for the principal teachings delivered by Khenchen Namdrol Rinpoche for the past twenty years. Fully authorized to transmit this lineage received directly from Kyabje Dudjom Rinpoche, Sangye has been teaching and transmitting the Tröma Nagmo Chöd actively for many years. 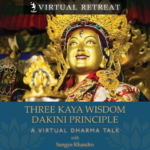 Sangye Khandro will introduce the meaning of the three kayas from a Dzogchen perspective in terms of ground, path, and fruition. She will elaborate upon the way to know and recognize the three kayas based on those three occasions and will then discuss the three kaya dakini principle and how…