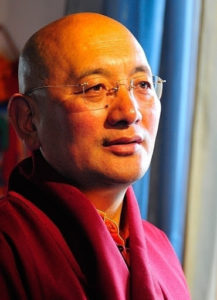 Ven. Sogan Rinpoche (Tulku Pema Lodoe) was born in 1964 in the Golok region of Amdo, in eastern Tibet. At the age of seventeen he went to Bayan Monastery to start his formal spiritual training. Later, he was recognized by H.H. the 14th Dalai Lama as the 6th Sogan Rinpoche and as a young man was enthroned at Awo Sera Monastery in East Kham (Serta), which he founded during his first incarnation as Sogan Rinpoche. He is also the head of Bayan Monastery in Golok. He assumed responsibility there at the direction of his root guru, Khenpo Munsel, a Dzogchen master and teacher in Tibet throughout most of the twentieth century and a chief disciple of Khenpo Ngag Chung.

Rinpoche has studied with many great masters of all four traditions of Tibetan Buddhism. After many years of study, pilgrimage and solitary retreat, Rinpoche left Tibet to continue his studies in India. While there, he studied extensively with prominent teachers and spent several years in retreat.

Rinpoche travels throughout North America and in Europe to teach Buddhism. For many years he has taught in the SF Bay region where Tupten Osel Choling is based. In 2012, his students in northern Italy founded Tupten Osel Ling, another dharma center under his spiritual guidance.

In 2004 Rinpoche established The Sogan Foundation (TSF), a secular non-profit organization which funded the construction of a science and technology facility for high school students in Golok, Tibet. Kunsel Kyetsal opened its doors for the first time in 2007. TSF’s second project has been constructing a basic water system for a community of elderly nomads located near Bayan Monastery. This job was completed during the summer of 2010. For the first time, residents can obtain clear, filtered water and are spared a difficult trek to an open spring which is susceptible to contamination. Rinpoche established The Sogan Foundation with the intent that continuing far into the future, the organization will serve as a vehicle for alleviating the suffering of the poor and the marginalized.