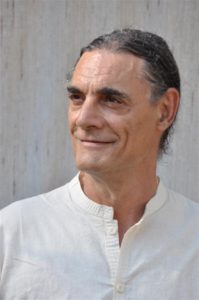 Fabio Andrico was born and raised in Italy and is an internationally recognized expert on the unique tradition of Tibetan Yoga, known as Yantra Yoga, from the lineage of the renowned Tibetan translator and Dzogchen master, Vairocana. Fabio studied directly under the great Tibetan Dzog Chen master, Chögyal Namkhai Norbu, who learned this extremely potent and transformative form of yoga from his uncle, the great yogi Urgyen Tenzin, who reached rainbow body (the highest level of realization in which the body completely dissolves into light at the time of death) in Tibet in 1962. After early studies of yoga in India, Fabio returned to Italy and met his teacher Chögyal Namkhai Norbu. Since 1977 he has been studying, practicing, teaching and writing on Yantra Yoga. He leads courses and yoga retreats internationally and remains one of the closest disciples of Chögyal Namkhai Norbu Rinpoche.