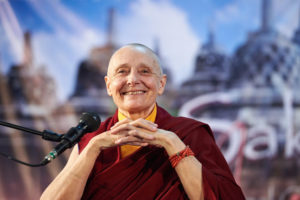 Jetsunma Tenzin Palmo was born in England in 1943 and named Diane Perry.

She and her older brother were raised by her mother in the Bethnal Green area of London after her father’s death when Diane was 2 years old. Mrs Perry was a spiritualist who held séances in the family home, and Jetsunma credits this as being a strong and positive influence on her development as a seeker of truth.

At the age of 18, she realized she was a Buddhist while reading the book The Mind Unshaken by John Walters. After leaving school she worked as a librarian at the Hackney Public Library and then SOAS (The School of Oriental and African Studies) in London, saving enough money to leave England in 1964, sailing to India to pursue her spiritual path. She headed north to Dalhousie in Himachal Pradesh, where she had arranged to work with an expat Englishwoman named Freda Bedi, who had opened a school for young reincarnated lamas among the exiled Tibetan community.

On her 21st birthday, in June 1964, the school had a special guest: His Eminence the 8th Khamtrul Rinpoche, a great Drukpa Kagyu lama. Diane recognized him immediately as her Guru and asked him if she could become a Nun. Only 3 months after arriving in India, the newly named Drubgyu Tenzin Palmo became one of the first Westerners to be ordained as a Tibetan Buddhist monastic.

In 1967 she received the sramanerika ordination at Rumtek Monastery in Sikkim from H.H. the 16th Karmapa. As full ordination is not yet available for women in the Tibetan tradition, in 1973 she travelled to Hong Kong to obtain the bhikshuni ordination at Miu Fat Temple.

Tenzin Palmo was based with Khamtrul Rinpoche and his community first in Dalhousie and later at the monastery of Tashi Jong, near Palampur, Himachal Pradesh for six years until 1970, when he directed her to the Himalayan valley of Lahaul in order to undertake more intensive practice. She stayed in Tayul Gompa, a small Lahauli monastery for the next 6 years, remaining in retreat during the long winter months. Then in 1976, seeking more seclusion and better conditions for practice, she found a cave a couple of hours hike from Tayul, at 13,200 feet above sea level. The cave was enhanced by building enclosing walls, creating a living space around 6 feet (1.8 metres) square. In the summer months supplies were delivered from Keylong and she grew turnips and potatoes nearby. She stockpiled for winter, when the cave was snowbound. She slept and meditated upright in a meditation box.

Despite many hardships and life-threatening experiences, Tenzin Palmo thrived in her solitary spiritual practice and lived in the cave for 12 years, from the ages of 33 to 45. For the first 9 years she occasionally had visitors or took trips away from the cave, while the last 3 years were spent in strict retreat. Her retreat ended in summer 1988 and after 24 years in India, she returned to Europe to stay with friends in Assisi, Italy. There she rediscovered her western roots and started to accept requests to teach.

Before H.E. Khamtrul Rinpoche passed away in 1980, he had on several occasions requested Tenzin Palmo to start a nunnery. She understood the importance of this and remembers when in 1993, his reincarnation, H.E. the 9th Khamtrul Rinpoche together with the Lamas of the Khampagar monastery at Tashi Jong again made the request. This time Tenzin Palmo was ready to take on the formidable task.  Legal preparations began, suitable land was found near Tashi Jong and she began slowly raising support worldwide.

After the publication of her biography Cave in the Snow by Vicki MacKenzie in 1998, her profile increased exponentially and she began annual international teaching tours to raise funds.In January 2000, the first nuns arrived while Tenzin Palmo was still based at Tashi Jong and in 2001 construction began at the Padhiarkar site. H.E. Khamtrul Rinpoche gave the nunnery the name Dongyu Gatsal Ling (DGL), which translates as “Garden of the Authentic Lineage”.

Today, DGL is fully completed and provides educational and spiritual instruction to over 100 nuns. In February 2008, Tenzin Palmo was given the rare title of Jetsunma, which means Venerable Master, by His Holiness the 12th Gyalwang Drukpa, Head of the Drukpa Kagyu lineage in recognition of her spiritual achievements as a nun and her efforts in promoting the status of female practitioners in Tibetan Buddhism.

JetsunmaTenzin Palmo spends most of the year at Dongyu Gatsal Ling Nunnery and occasionally tours to give teachings and raise funds for the ongoing needs of the DGL nuns and Nunnery. In addition to her role as Founding Director of Dongyu Gatsal Ling Nunnery, Jetsunma is President of Sakyadhita International Association of Buddhist Women, Founding Director of the Alliance of Non Himalayan Nuns; Honorary Advisor to the International Network of Engaged Buddhists and Founding Member of the Committee for Bhiksuni Ordination.

She has traveled on six continents helping to spread the Dharma and compassion to all beings. In the summer of 2019, as the President of the Sakyadhita International Association of Buddhist Women, Jetsunma Tenzin Palmo hosted over 800 participants from all over the world at a very successful, full to capacity conference in the Blue Mountains of Australia.