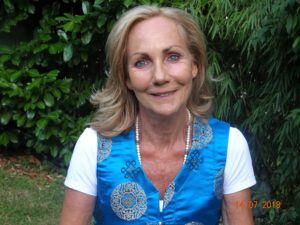 Dagmar Loewenkamp has been on the Buddhist path and worked as a psychotherapist and supervisor in Analytic Therapy, Hypnotherapy,  Breath and Bodywork since 1989. She has been a student of several different Buddhist schools and studied with Sogyal Rinpoche and Dzongsar Khyentse Rinpoche for many years. Through her Buddhist practice, Dagmar felt the need to bring the path into the therapeutic work. Between 1999 and 2005 she participated in, assisted, and co-taught “Karuna Training” (the German version of the Naropa University’s Contemplative Psychology program) and is a meditation instructor. She met Lama Tsultrim Allione in 2004 and has since been her student.